Obfuscation can be defined as:

“When someone presents an argument containing unnecessarily complex language that confuses or deceives.”

We are now confronting obfuscation when it comes to understanding or evaluating the generation and use of electricity.

The Energy Information Administration (EIA) is a prime example of an organization guilty of obfuscation.

A rational person, in evaluating the generation and use of electricity, will want to know its cost and reliability.

But the rational person is now confronted with a plethora of competing terms and evaluations.

Here is how the EIA, a practitioner of obfuscation, describes LACE:

“The calculation of avoided costs is based on the marginal value of energy and capacity that would result from adding a unit of a given technology to the system as it exists or is projected to exist at a specified future date and represents the potential value available to the project owner from the project’s contribution to satisfying both energy and capacity requirements.”

These terms and complexities are designed to help promote wind and solar.

For example, here is how one anonymous person, i.e., EngineerPoet, describes the use of LACE:

“Wind and solar generation can only be valued at the cost it avoids, not its own levelized cost.”

“What does my electricity cost me, and do wind and solar increase my cost?”

The question is easily answered since the average residential cost of electricity is available for each state, as is each state’s investment in wind and solar.

Table 1 lists states with the highest cost of electricity, other than Alaska and Hawaii which are unique due to their geographic locations.

The accompanying graph of the United States shows states with the highest and lowest cost for electricity:

The data on the installed capacity for Table 2, was extracted from the CarbonBrief/Clear on Climate website, while electricity costs are from the EIA, as in Table 1. 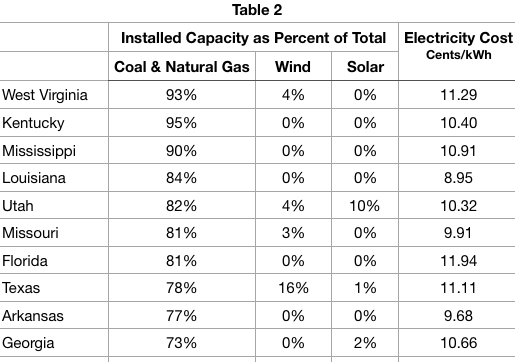 Two exceptions are worth noting:

Here is the formula used by EIA to calculate LACE:

In other words, LACE uses data from a feedback loop that increases the number of dispatched hours.

This raises an additional concern, not yet investigated:

If auctions result in more dispatched hours than would otherwise have occurred if full costs were used, it might inflate the capacity factors used elsewhere by the EIA.

The above graphics and tables answer whether wind and solar increases the cost of electricity, which is what the average consumer is interested in knowing.

Wind and solar increases the cost of electricity.

No amount obfuscation can hide this fact.

Scroll Up
Table of Contents