California, with great fanfare and huge media accolades, announced it will mandate the use of PV rooftop solar on all new homes, including any building of three stories or less, beginning in 2020.

But, does anyone see a problem with this fanfare when viewing this graphic from the energy information administration (EIA)? 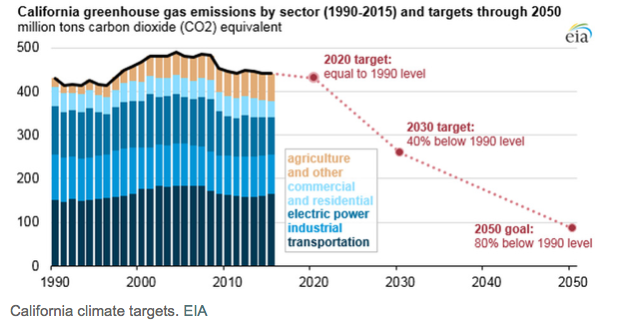 (For clarity, the sectors are, from top to bottom: Agriculture, Commercial and Residential, Electric Power, Industrial, and Transportation.)

With all its efforts to install wind and solar, and do away with nuclear and coal-fired power generation, California has made absolutely no improvement in lowering its CO2 emissions, at least when compared with 1990 levels. Reductions since 2008 were also caused, at least in part, by the great recession. Even California’s 2020 target is merely to reach 1990 levels.

So far in California, it’s been all pain and no gain, with electricity prices, double those of the average US residential price, and housing prices out of reach for the average worker.

The real headline should be:

“Governor Jerry Brown’s legacy is all pain and no gain.”

The cash generating parts of the economy are agriculture and industry. There aren’t many headlines about how California will cut CO2 emissions from these two sectors since they are the backbone of the California economy, which leaves the electric power and transportation sectors to be targeted for CO2 emission reductions.

Fast forward to the 2050 goal of cutting CO2 emissions 90%. It’s doubtful PV rooftop solar will play much of a roll in achieving this goal.

Now, squeeze the electric power and transportation sectors to zero, and the goal still can’t be met, assuming the cash flow positive parts of the economy, agriculture and industry, which provides jobs and tax revenues, aren’t substantially cut.

The media attention given to the mandate for PV rooftop solar seems a little over the top, given it will have virtually no effect on achieving California’s goal of cutting CO2 emissions 90% by 2050… Or 40% by 2030.

About all it does is throw a lifeline to the solar industry that’s been on a downhill financial trajectory.

AGW environmental extremists relish the publicity from the PV rooftop solar mandate because it diverts people’s attention from what the extremists are really trying to accomplish, as well as from the hardships and anti-people policies AGW extremists want to impose on Americans.