Why are we building power plants that aren’t needed?

The growth in demand for electricity has been less than 1% for nearly fifteen years. 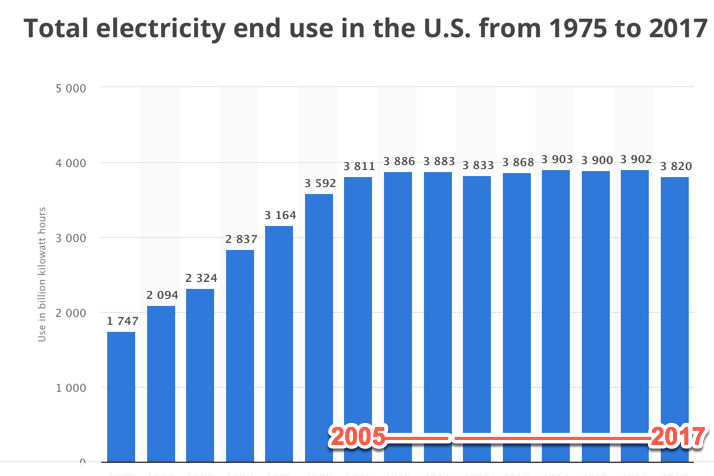 It’s clear from the chart that most of the investment in new power plants since around 2005 has been unnecessary.

Total consumption has been roughly within the limits of installed capacity which includes provision for unexpected peaks in demand.

Since demand has not been increasing, construction would only be needed to replace units being retired because they could not be upgraded to meet new EPA regulations, primarily for mercury capture.

Any such replacement units could have been built at the lowest possible cost by using natural gas combined cycle units.

The accompanying chart shows additions and retirements of the US power generation fleet. 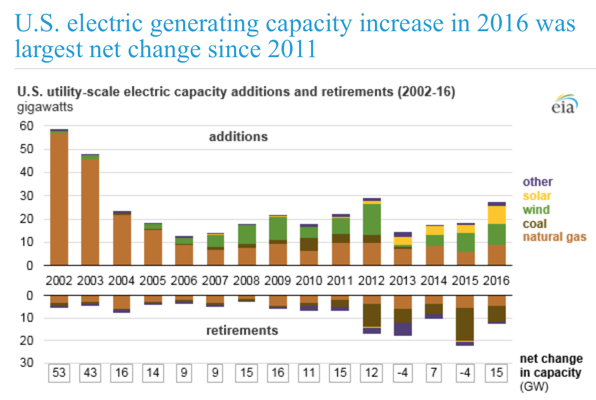 While demand has barely budged, total new renewable, i.e., wind and solar, capacity has increased by around 90 GW. (The builders of wind and solar plants could earn money from tax credits and from an increased rate base.)

These additions were not necessary to meet demand because there was little to no growth in demand and because demand could already be met with existing traditional power generation sources.

Meanwhile, the cost of electricity has increased.

If low-cost coal-fired plants have been replaced with high-cost wind and solar power plants, it’s obvious the cost of electricity to consumers will increase.

This is confirmed by EIA tables showing the cost of electricity in all 50 states, where states with large amounts of renewables have high costs for electricity, while states relying most heavily on coal and natural gas have the lowest cost for electricity. See, Obfuscation

But the cost of electricity to consumers is increasing … and increasing dramatically in percentage terms. In California, residential rates have already increased as much as 25% in a few short years, and some consumers are scheduled to see their rates increase by as much as an additional 80%.

In California, consumers are faced with draconian increases because of policies to increase the use of wind and solar and eliminate the use of fossil fuels. The same is essentially true in other states where wind and solar have been increased with consumers paying more for their electricity than the average American.

And this is solely because AGW enthusiasts are demanding CO2 emissions be cut.