Secretary of the Navy Mabus is endangering the lives of our men and women in the armed services by forcing the use of biofuels on the Navy.

He is adhering to Executive Order 13514, October 8, 2009, issued by the president that orders the Defense Department (DOD) and other agencies to cut CO2 and other greenhouse gas (GHG) emissions.

The armed services should not be used as a laboratory for experimenting with methods for cutting GHG emissions, yet Secretary Mabus has pursued this effort with a vengeance.

He has established the goal of having a nuclear carrier strike force with ships, other than the carriers, powered by biofuels.

He had a recent exercise conducted off Hawaii where planes used blends of 50% biofuels and 50% conventional fuels. The biofuels cost over $26 per gallon, compared with standard jet fuels costing less than $4.00 per gallon.

A recent report indicated that jet engines ran cooler with blended fuels than with 100% standard jet fuel. This was lauded as potentially reducing maintenance costs.

A cooler running engine, however, could mean reduced power – reduced power and speed can cause death when in combat at 30,000 feet.

By 2020, the Navy plans to use alternative fuel for half of all consumption afloat and the Pentagon wants to invest $170 million in new biofuel refineries in the United States.

In addition to cutting GHG, the other rationale for using biofuels is to stop using foreign oil. The United States has enough oil to meet all its military needs for decades, so this rationale is bogus.

Little is written about the logistics involved with biofuels.

Ships operating at sea are dependent on the service force to deliver food, ammunition, aviation fuel, fuel oil and other supplies, such as medicine and equipment. When in a foreign port, ships typically acquire supplies from local sources that are less expensive or obviate the need for transport across the ocean.

Biofuel refineries aren’t likely to be found in Asian, Mideast or Mediterranean ports, so biofuels would have to be transported across the ocean. Jet fuel and fuel oil are found in foreign locations which can simplify logistics, and save money.

Will there be a need for additional Fast Combat Support Ships (or oilers) that would increase overall expense and complicate logistics? For example, additional supply ships would be required if biofuels must be kept separated from regular fuels. Also if biofuels aren’t available locally, regular fuel acquired from local sources might have to be mixed with biofuels already on-board. Mixing could result in blends that are other than 50% – 50%.

When operating at sea, these items must be transferred from supply ships while underway. Typically, the supply ship will have a combatant on both the port and starboard sides while transferring goods underway.

Underway replenishment operations require high standards of performance. A simple action can cause a collision with damage to both ships and possible loss of life. If, for example, a supply ship allows its bow to drift, or be forced, inside a carrier’s bow wake, the supply ship will be sucked into the carrier with the ships colliding, coming together, side by side, while traveling at 12 knots or more. 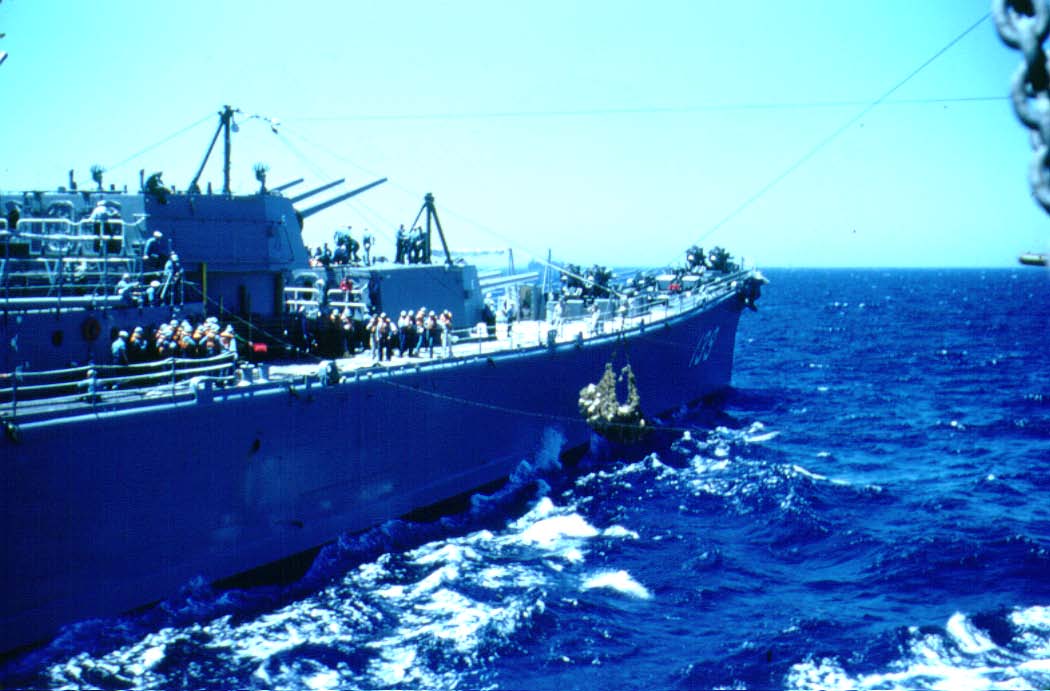 While these pictures are from the 1950s, they show the close proximity in which the ships operate during underway replenishment. Cargo nets can be seen in two of the pictures with material, in this case frozen food, being transferred from the supply ship. The most modern support ships use helicopters for the transfer of dry cargo, but still must rig hoses connecting the ships when transferring jet fuel or fuel oil.

The rigging has been improved with counter weights to compensate for roll and drift, in an effort to maintain tension on the lines, but the process is essentially the same today as it was then.

The preoccupation with GHG is requiring military commanders and their staffs to spend valuable time worrying about GHG trivia rather than focusing on the nation’s defense.

In August of 2010, DOD issued a Strategic Sustainability Performance Plan (SSPP) to comply with Executive Order 13514.

It is terrifying reading, and demonstrates how a preoccupation with global warming and GHG is damaging our national defense. DOD must spend money on cutting GHG rather than buying equipment.

The following two paragraphs demonstrate the government’s fixation on GHG and how additional bureaucracy is being forced onto our armed forces.

The SSPP says: “Each DOD Component’s Sustainability Official will provide semi-annual progress reporting through the Senior Sustainability Council to the Department SSO.”

Specifically, “To develop the target, the Department convened a GHG Accounting Group with representation from the Military Departments and the Defense Logistics Agency (DLA). As a starting point, the group used the modeling tool specifically developed by the White House Council on Environmental Quality (CEQ).” [Emphasis added.]

Will biofuels complicate refueling?  Does the concentration of biofuels, say 70% – 30% rather than 50% – 50%, make a difference? Are biofuels and alternative fuels truly drop-in fuels?

Since the United States has all the oil required to satisfy its needs, and has a system in place for efficiently supplying the needs of its fleet while deployed, is there a need for an expensive and potentially risky biofuels program where the only benefit is to cut GHG emissions?

No other benefits have been identified. Biofuels don’t improve range, don’t improve efficiency and aren’t less expensive … in fact, they are over six times more expensive than conventional fuels.

Any comparison with the navy’s shift from coal to oil is ludicrous. Oil eliminated the need for coaling bases, eliminated the back-breaking and time consuming effort to reload the ship with coal, while improving range and efficiency. Castles of Steel describes the incredible effort and enormous operating restrictions that the coal-powered navies had to endure. Conversion to oil was a truly empowering and revolutionary change – biofuels are not.

Efforts by the Navy and our other armed services to reduce GHG are dangerous to national security and fool hardy.

The SSPP is 99 pages long and can be obtained here: http://www.acq.osd.mil/ie/download/green_energy/dod_sustainability/DoD%20SSPP-PUBLIC-26Aug10.pdf

The executive order can be downloaded here: http://www.hss.energy.gov/nuclearsafety/env/rules/74/74fr52117.pdf

The book, Castles of Steel, by Massie, about the British Fleet in WWI, provides excellent documentation regarding the problems with coal.

If you find these articles on energy issues interesting and informative, you can have them delivered directly to your mailbox by going to the Email Subscription heading below the photo.

© Power For USA, 2010 – 2012. Unauthorized use and/or duplication of this material without express and written permission from this blog’s author is strictly prohibited. Excerpts and links may be used, provided that full and clear credit is given to Power For USA with appropriate and specific direction to the original content.

0 Replies to “Dangerous and Fool Hardy”