Earlier articles in this series include:

Natural gas can be the wonder fuel for the next century or two.

The immediate concern is how rapidly the export terminals can be placed into operation in the United States. 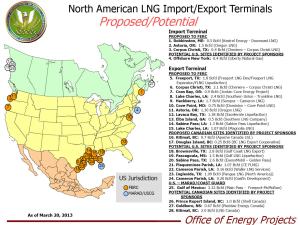 Of these, only one has been approved by FERC, so that construction can begin.

Here is a status report on approvals.

It’s obvious that at this rate it will be too late for the United States to have an important influence on events in Europe. Much of the output from the above list of LNG export facilities has already been committed for export to Asia.

FERC is the major road block to obtaining approvals, though other political issues could have a bearing on approvals, primarily to non-FTA countries.

The second negative consequence of delay is that the cost of building export facilities is increasing. According to a report in Turbo Machinery International, the cost has essentially doubled between, before 2010 and today. The average cost between 2000 and 2010 was $500/ton per annum (tpa), while today, the average cost is $1,200 /tpa.

The cost of building LNG export facilities is huge. A train, the basic refrigeration and compression unit, with a capacity of 3 to 5 million tpa, which is equal to 0.4 to 0.6 bcf/d, will cost $4 to $6 billion. For example, a facility comparable to the Cameron LNG facility (see above table) would cost nearly $15 billion.

For the United States to compete, and to have an effect on events in Europe, FERC must move more rapidly to approve projects.

There is also the possibility that negotiating free trade agreements will take precedence over exporting natural gas. The thinking is that we should use natural gas as negotiating leverage in free trade negotiations to improve our export of other goods.

Our ability to affect Europe’s reliance on Russia for natural gas could be held hostage to using natural gas as a negotiating ploy in free trade negotiations.

As demonstrated in the earlier articles, there is sufficient natural gas for export, as well as for power generation; increased manufacturing that relies on natural gas; and for heating, without increasing the domestic price of natural gas. There will always be periods when supply and demand get out of balance, such as was the case this past severe winter, but short term demand/supply issues should not override the basic fact that the United States has enough natural gas to meet all its strategic objectives.

These articles can be delivered directly to your mailbox. Subscribe by clicking below the photo on the right side of the article where it says email subscription, and entering your email address. You can unsubscribe at any time.

If you know someone who would be interested in these articles you can send him/her a link to the article and suggest he/she subscribes by clicking on the email subscription link under the picture on the right side of the page, and entering their email address.

© Power For USA, 2010 – 2014. Unauthorized use and/or duplication of this material without express and written permission from this blog’s author, Donn Dears, LLC, is strictly prohibited. Excerpts and links may be used, provided that full and clear credit is given to Power For USA with appropriate and specific direction to the original content.