The United States will end the decade with 104 nuclear power plants, after four are closed1, and the four under construction are completed: Two, in Georgia, and two in South Carolina2.

These 104 plants will continue to produce about 20% of U.S. electricity … for a few more years, and then the decline begins.

Existing plants need to receive a 20-year renewal to their original 40-year operating license. Approximately 87 of the 100 existing plants have received their 20-year license renewals, and it has been widely assumed the remaining units will also receive renewals, though a few are now in question due to environmental agitation.

The first of the units with expiring licenses will need to obtain their second 20-year renewal in the mid-2030s, about twenty years from now.

There is every reason to believe that most of these plants will not receive a second 20-year license renewal.

Without a second 20-year renewal, existing nuclear power plants will have to begin shutting down in the mid-2030s. 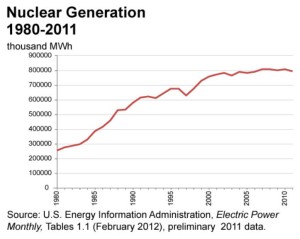 With low natural gas prices, and the possibility that new ultra-supercritical coal-fired power plants can be built at less than half the cost of nuclear power plants, the economics mitigate against building new nuclear plants in the United States.

With Yucca Mountain storage seemingly going nowhere, and with the public emotionally opposed to nuclear power, it would seem that nuclear will be in terminal decline in the United States.

There’s a very strong possibility that nuclear will supply less than 5% of our electricity by 2100.

Even small modular nuclear power plants cost $6,000 / KW, so they may also be too expensive when compared with alternatives.

Meanwhile the situation elsewhere in the world is different.

China is the largest builder of new nuclear power plants, with approximately 28 under construction.

Russia has about 4 plants under construction.

Interestingly, Russia’s Rosatom, is building 15 plants in other countries, including Turkey, Vietnam, Belarus, and a few others.

India is building 4 or 5 units.

It’s highly probable that nuclear power in The United States will begin its long-term decline in about 20 years.

These articles can be delivered directly to your mailbox. Subscribe by clicking below the photo on the right side of the article where it says email subscription, and entering your email address. You can unsubscribe at any time.

If you know someone who would be interested in these articles you can send him/her a link to the article and suggest he/she subscribes by clicking on the email subscription link under the picture on the right side of the page, and entering their email address.

© Power For USA, 2010 – 2014. Unauthorized use and/or duplication of this material without express and written permission from this blog’s author, Donn Dears, LLC, is strictly prohibited. Excerpts and links may be used, provided that full and clear credit is given to Power For USA with appropriate and specific direction to the original content.