Aside from the fact that the levelized cost of electricity (LCOE) is higher for wind and solar, there are a multitude of other operating costs that result in wind and solar being far more expensive than coal or natural gas for generating electricity.Back up generation

This is a well-documented cost, where power plants, usually natural gas, must be kept in spinning reserve, ready to come online when the wind stops blowing or the sun stops shining. Wind and solar are unreliable, and must have back-up power ready to go on-line at a moment’s notice. First, there is the cost of natural gas to keep these units operating off-line, but secondly, there are the additional maintenance costs from the added wear and tear on these units.

The cost of storage varies, but at a minimum is around $2,000 per KW, about the same as the cost of a new natural gas combined cycle power plant. A recent trial by Pacific Gas & Electric resulted in storage costs that were more than twice as large. 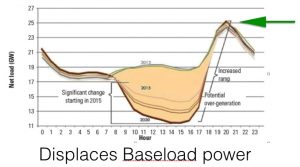 The strongest winds, which are the best for generating electricity, are found hundreds, if not a thousand or more miles away from where the electricity is used. This requires building expensive transmission lines. While it’s true, new coal-fired or natural gas combined cycle (NGCC) power plants may also need new transmission lines, these power plants are located closer to where the electricity is used.

The Joint Coordinated System Plan determined it would cost an additional $200 billion to build the transmission lines needed if only half the nation used wind energy, where wind supplied only 20% of the power.

Because wind and solar operate intermittently, it’s necessary for these baseload plants to cycle up and down, following the constantly changing output from wind and solar plants. Cycling also results in an increase in the number of cold-starts and shutdowns.

Cycling puts an added strain on boilers, turbines and many other components of the transmission and distribution system.

Thermal expansion and contraction is the main culprit.

Different materials have different coefficients of expansion, so boiler tubing may expand more rapidly than the firewalls and other materials surrounding the tubing.

Ramping up when the sun sets, as described above, also causes this type of damage.

This damage increases maintenance costs. Utilities, such as Duke Power, are installing new monitoring equipment, and attempting to develop new operating methods in an effort to minimize the damaging effects of transient temperatures.
Industry trade publications, such as Power Magazine and Turbomachinery International, are recognizing the damaging and costly effects of cycling.

All of these are operating costs: Operating costs that are borne by the utility, and eventually paid for by customers.

They don’t include the social costs when there is a blackout, such as occurred in South Australia due to the unreliability of wind and solar.

Wind and solar are unreliable, and far more expensive than electricity produced by coal-fired and NGCC power plants.

One Reply to “Why Renewables Cost More”