AWEA has made statements such as the following from its 2016 annual report:

“Wind power delivered 30% of all new capacity installed over the past five years.”

Accompanied by this chart:

Such claims, however, are very misleading.

The real issues are:

How much electricity can this installed capacity actually generate, and will it be available when it’s needed?

Claiming that 30% of all new capacity is from wind is very misleading because that capacity can’t generate very much electricity.

This chart from the Department of Energy (DOE) shows how little electricity is generated by wind, despite its seemingly large installed capacity. 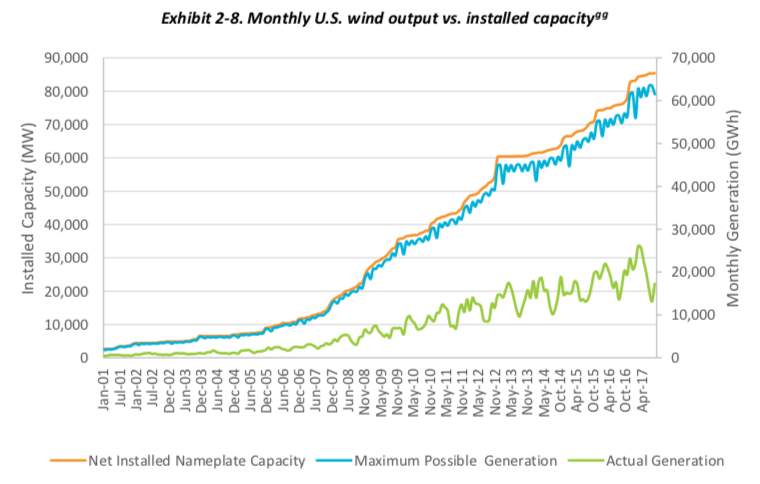 Even more important, the electricity may not be available when it’s needed.

On very hot days, especially in the afternoon, the wind is prone not to blow. Yet this is when electricity is needed because of additional air-conditioning load.

On cold winter days, the wind may blow either too hard, or not enough.

The recent winter storm in New England showed that wind couldn’t be relied upon.

Wind output was down 12% from December’s output, during the period of the storm, as shown in this DOE chart. (Light blue area>) 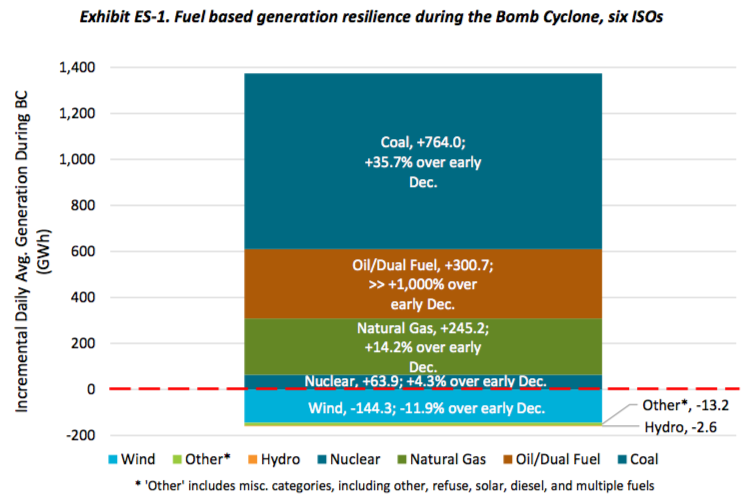 Not only does the installed capacity generate very little electricity, which may not be available when needed, but it’s also very expensive.

The LCOE for existing coal-fired power plants was referenced because it’s very difficult to obtain honest cost information. The EIA currently only publishes cost estimates for plants coming online in 2022 which are speculative, at best.

During the past several years, the EIA added an extra charge of $15 per ton of CO2 to its estimates for new coal-fired power plant LCOEs, distorting actual costs and making it impossible to use EIA data for cost comparisons.

If the cost of wind, and for that matter solar, were as low as being claimed by the media, the EIA, and others, wouldn’t have to distort their LCOEs, or manipulate them, such as providing estimates four years in the future or creating alternative measures such as LACE. See, Obfuscation

The amount of electricity actually produced from the huge investment in wind power is very small.

The electricity produced by wind installations is unreliable and may not be available during hot summer days when it’s badly needed due to the increased air-conditioning load, and may decrease during winter storms when the wind blows too strongly.

Electricity from wind is not only unreliable, it’s expensive.

The AWEA should be ashamed of itself for bragging about the increase in installed wind capacity.