…Europe’s Dependence on Russia for Energy…

President Trump chastised Germany for its reliance on Russian natural gas, and the building of the Nord Stream 2 pipeline.

Germany is highly dependent on imports for its energy, especially as it gets rid of nuclear and coal (lignite).

Russia supplied nearly 40% of Germany’s oil and approximately 35% of its natural gas in 2016. Even 32% of Germany’s hard-coal came from Russia.

Russia has a history of manipulating Europe’s energy supply.

This chart from the Baker Institute’s, Issue Brief, “Russia’s Use of the Energy Weapon in Europe” shows Russian attempts to manipulate oil supplies (in gray) and natural gas supplies (in Blue). 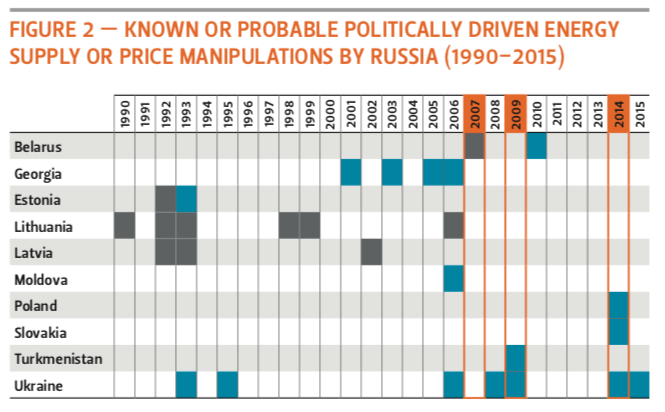 Strategically, Europe could become a large market for U.S. LNG as the U.S. develops its export capabilities.

Europe currently has 22 LNG import terminals, which, according to King & Spalding of the UK, have an average utilization, in 2017, of only 25%.

Poland and Lithuania, however, are increasing the size of their import facilities and have imported U.S. LNG.

Europe is currently paying around $7.50 per million BTU to Russia for its natural gas.

U.S. exports to the EU have been at a price of around $5 per million BTU, however, this price does not cover full costs, but does help pay for fixed costs. Full cost, including liquefaction and shipping to Europe, is around $7.50 per million BTU.

In addition, Europe’s ability to produce natural gas from European sources will decline as gas fields in the UK, The Netherlands, and Norway decline.

As U.S. export capability increases, the world market for natural gas will become more competitive with the United States competing against Qatar and Australia, and several other smaller producers, for both Asian and European markets.

Meanwhile, Europe could shift some of its natural gas imports to the United States, and reduce Russia’s influence over Europe.

4 Replies to “Europe’s Dependence on Russia for Energy”