…Rush to Judgment About Oil…

These are the questions that need to be addressed.

Or, should the WSJ have indicated the article was merely speculation rather than a prediction? 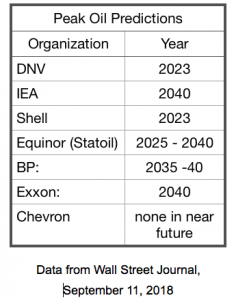 Many people base their investment decisions on what the WSJ reports. Think of the person about to retire who expects a balanced discussion from the WSJ, especially on an issue that affects not only oil companies but also the entire transportation industry.

“Investors are increasingly sitting up and taking notice, demanding big oil companies outline how resilient their businesses are to an energy transition.”

But, are we facing a radical energy transition?

Or, is it an ordinary transition with BEVs gradually replacing ICE vehicles?

The WSJ article paid little heed to the possibility there would be an ongoing need for oil for many decades into the future. Even if batteries displace all ICE vehicles, including mopeds and motorbikes, oil demand for other applications will grow. See, Peak Oil Demand is Bogus and Meaningless

As shown in earlier articles, the end of the oil era depends on how rapidly BEVs replace the internal combustion engine, and whether government regulations result in the forced abandonment of fossil fuels.

China’s use of golf cart-sized BEVs, using either Lithium-ion or lead-acid batteries, complicates any forecast concerning the future of BEVs and their displacement of oil.

Are these Chinese golf cart-sized vehicles a replacement for minibikes and mopeds rather than BEVs?

It is too early to predict with any certainty that battery-powered vehicles, large and small, will result in the wholesale replacement of ICEs in the near future. See, Battery Powered Vehicles and Demand for Oil

Abandoning fossil fuels because of climate change is a risk, but It’s not so much a technical risk as it is a political risk.

The EU has bought into the argument that fossil fuels are a threat to the climate and have adopted regulations and policies to force the abandonment of fossil fuels.

It’s important to recognize they are relying on computer models, and that computers can be wrong when the input data or algorithms are wrong.

The threat from climate change is based on how temperatures respond to a doubling of atmospheric CO2.  It’s been shown that computers exaggerate the effect, and that temperatures are likely to rise by only one degree or so, rather than the seven degrees F touted in the media. See, Why the IPCC Models are Wrong

With this backdrop of EU politics, it’s easy to understand why oil companies based in Europe conjecture about the future of oil.

DNV GL, in particular, must operate in the milieu of EU politics. It is an internationally accredited registrar and classification society headquartered in Høvik, Norway, implying a need to establish close working relationships with European governments.

In the United States, ExxonMobil must defend itself from political attacks and lawsuits and has produced a report stating its views on the future of oil. See, Peak Oil Demand is Bogus and Meaningless

It’s extremely uncertain how soon BEVs will significantly reduce the use of oil.

It’s very possible that oil use, other than for light-duty vehicles and some larger trucks, will continue to grow.

As for abandoning fossil fuels; Europe is struggling to cut their use; China and Asian countries are plowing ahead with their use even as they promote battery-powered vehicles; Africa is desperate for electricity and will continue to use fossil fuels; while the United States finds itself with a few states promoting the abandonment of fossil fuels while many other states see abandonment as unnecessary and costly.

This graph shows that populations will grow rapidly in India, Asia-Pacific and Africa, with the largest growth in Africa. These people will demand a better lifestyle, and they will get it or else. They will use fossil fuels whether Europeans and Governor Brown like it or not.

The End of the Oil Era is a specious assertion, i.e., superficially plausible but actually wrong.

4 Replies to “Rush to Judgment About Oil”