My first book on the CO2 issue, Carbon Folly, was published in 2008. It was remarkably prescient.

It did not, however, predict the decline in the use of coal as the result of EPA regulations under the Obama administration. As a result of the EPA regulations, CO2 emissions declined slightly over the past several years.

However, the basic source of CO2 emissions remain as they were in 2004.

In addition, the effects of cutting CO2 emissions 80% didn’t change either.

The accompanying table from Carbon Folly shows how cutting CO2 emissions 80% by 2050 would cripple the US economy and send Americans back to living as they did in the 1800s. 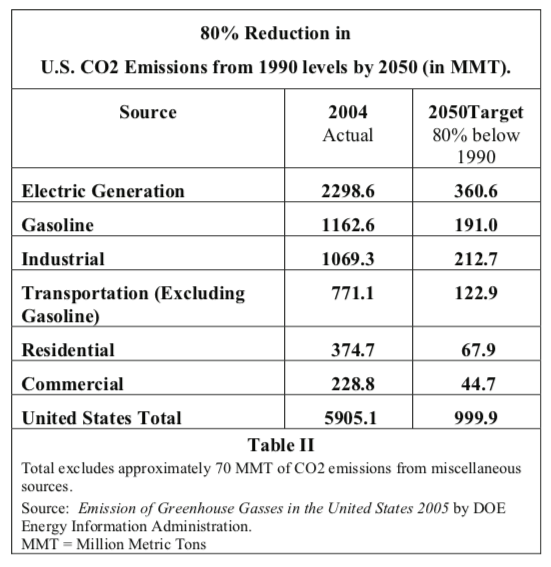 The futility of attempting to cut CO2 emissions 80% can be illustrated by examining a few of the largest sources of CO2 emissions.

While battery-powered vehicles (BEVs) might cut the use of gasoline, those emissions would be replaced to a large extent by increasing the emissions from generating the electricity required for charging batteries.

Emissions from transportation are largely from airplanes and trucks. Airplane emissions are forecast to increase as there is no realistic substitute for jet fuel and the world’s airways are set to expand as populations in Asia and Africa increase.

But the chart that is most disturbing is the chart showing China’s emissions.

In other words, the United States could eliminate 100% of its CO2 emissions and it would accomplish nothing because China’s emissions would have replaced them.

It was obvious in 2008 when Carbon Folly was first published, that the United States would have to destroy its economy and standard of living if it tried to cut its CO2 emissions 80%.

Now, assuming CO2 emissions are responsible for AGW, it’s also obvious that the United States would have accomplished nothing by destroying its economy since other countries, especially China, would have replaced all of the CO2 emissions eliminated by the U.S.

Attempting to cut C02 emissions is worse than a fool’s errand, because it will destroy our standard of living and prevent billions of people around the world to escape poverty.