The Campfire fire in California is tragic and its effects on people can’t be minimized.

It’s wrong, however, to use it as a poster child for global warming and climate change.

“This is an example of what we can expect. The fires are burning in California. They’ll be burning in France, burning all around the world” without a significant reduction in carbon emissions.

However, Governor Brown is wrong when referring to climate change caused by CO2.

The number of forest fires in the United States has not been increasing due to climate change caused by an increase in atmospheric CO2.

This chart from data supplied by the National Interagency Fire Center (NIFC) provides a graph showing the acres destroyed by forest fires in the United States over the past 92 years through 2017. 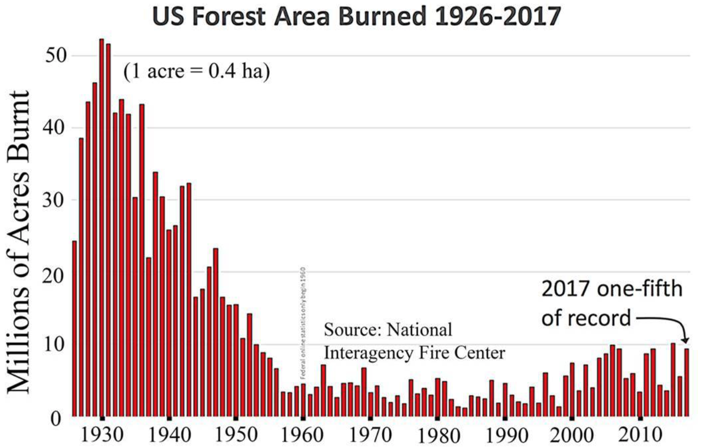 It should be noted that the data from the NIFC prior to 1983 may be less accurate as it is derived from less defined sources. However, the trend is supported by individual reports of fires that occurred before 1926. Some of the largest and deadliest occurred then.

Earlier, before those covered by the attached NIFC chart, there were terrible forest fires:

All of these fires caused considerable damage and had tragic consequences in terms of people killed.

And all of them were before significant increases in atmospheric CO2.

It’s important to address the conditions that lead to extensive forest fires, but climate change supposedly caused by CO2 is not one of them.

Anthropogenic Global Warming (AGW) is not causing an increase in disasters, including forest fires.

Governor Brown and other AGW adherents are fear mongering when they make any such claim.