…A Modern Story of Hope…

In 1948, after enduring years of war, people prayed for peace ever after, as expressed by this popular wartime song:

But, an Iron Curtain fell across Europe, “From Stettin in the Baltic to Trieste in the Adriatic.”

Berlin became the center of this conflict as Russia cut the road and rail access to West Berlin, preventing coal, food and medicine from reaching the beleaguered people of West Berlin.

Christmas of 1948 was cast in darkness by this new conflict.

Would a war-weary America pull back and leave the free people of West Berlin to be enslaved by Russia?

President Truman responded with a gutsy call by establishing the Berlin Airlift, a dangerous and risky attempt to supply the people of West Berlin with coal, food and medicine.

The events that unfolded during the airlift were retold in the Salt Lake City Tabernacle a few years ago when hundreds of tiny parachutes, made from handkerchiefs, started falling from the ceiling into the congregation below, while “Hal” Halvorsen stood on the stage receiving a standing ovation from the congregation. Many of whom had tear-streaked faces.

“Hal” Halverson, now 98, was a pilot, who, on an early flight into Tempelhof Airport, during the Berlin Airlift, taxied his plane to where it could be unloaded, and then walked over to the fence surrounding the airfield while the ground crew did its work.

At the fence, he saw German children staring through the barbed-wire fence as the planes and their cargoes of coal, food and medicine were unloaded.

It was then “Hal” realized he could do more, a lot more to help raise the spirits of the children of West Berlin. 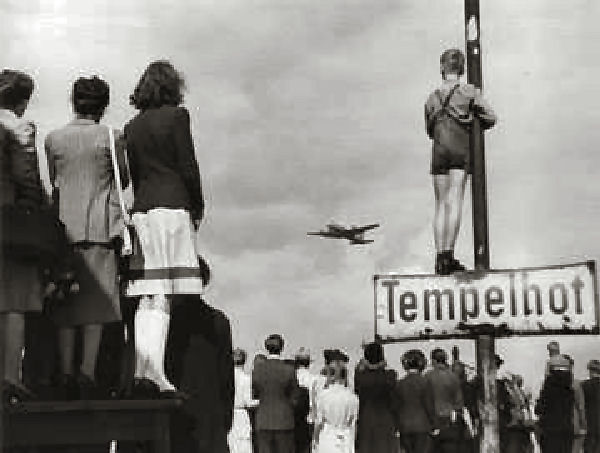 On his next flight into Tempelhof, “Hal” and his crew took the action “Hal” had decided upon at the barbed wire fence where he had given two pieces of gum, far too little for all the children at the fence, but where even the gum-wrappings themselves were treated with care by the children.

His actions became widely known among other aircrews, and it wasn’t long before other pilots and aircrews followed in “Hal’s” footsteps, throwing small parachutes, handmade from handkerchiefs, with candy bars attached, from their planes as they approached Tempelhof.

The children waited in anticipation for the aircrews to drop candy to them. They sent messages to “Uncle Wiggly,” so named because he had told the children to watch for his plane as it approached Templhof where he would wiggle the wings of his plane.

A Christmas celebration in 1948 in Berlin was made possible by the airlift. Coal provided warmth during the winter of ’48, while candy attached to tiny parachutes furnished cheer during that Christmas season.

Hal’s is a typical American story of generosity, of helping those who were desolate and in danger, and who wanted freedom.

It’s a story, symbolic of this time of year, of peace and giving. Watch, The Candy Bomber http://bit.ly/2CqXpql

2 Replies to “A Modern Story of Hope”