When they were formed twenty years ago, RTO/ISOs were supposed to develop competitive markets for electricity that resulted in the lowest possible price for electricity for consumers in the regions covered by RTO/ISOs.

As shown in an earlier article, the RTO/ISO auctions are structured to favor wind and solar over baseload power plants, whether they be natural gas, nuclear or coal-fired. The auctions have been driving nuclear plants out of business. See, The Market for Electricity is Rigged

Have the RTO/ISOs achieved their intended purpose of achieving low-cost electricity for consumers?

If not, they have failed.

Using data from the Energy Information Administration (EIA), its possible to determine whether RTO/ISOs or traditional regulated markets have achieved the lowest cost electricity for consumers. 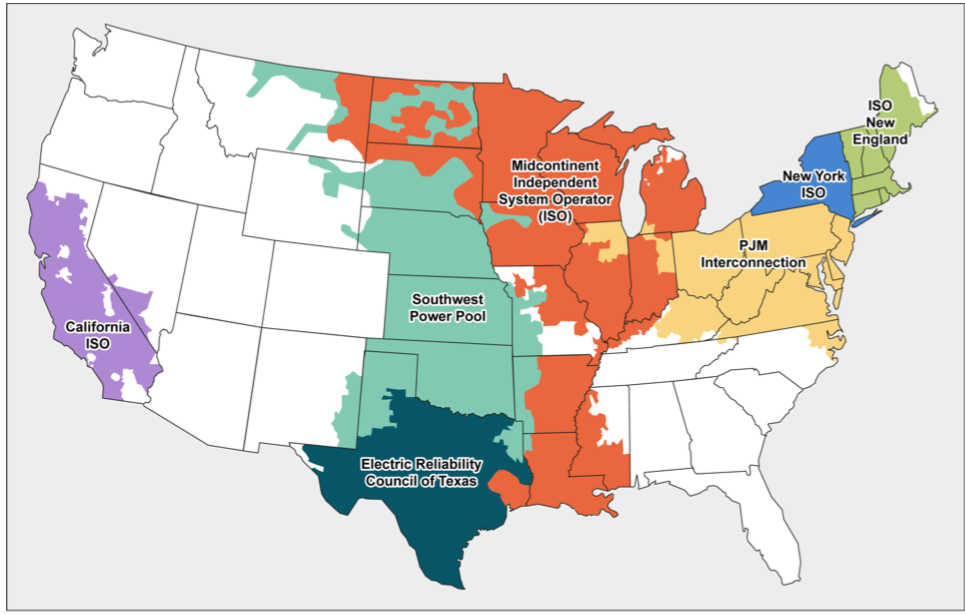 Listed below in the table are the seven RTO/ISOs and the traditionally regulated areas with the average price for electricity in 2003 and in 2017, together with the percent increases for each region and area.

At first blush, it would appear that RTO/ISOs have failed to deliver the promise of low prices for electricity.

As a group, RTO/ISOs had a 64% increase in the residential price of electricity, while traditionally regulated markets only had a 53% increase.

But two of the RTO/ISOs only had a 30% increase, which leaves open the question as to whether RTO/ISOs have failed. 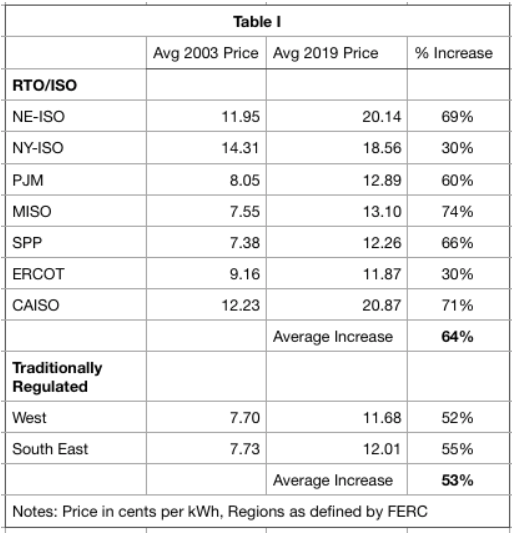 A closer look at these two RTO/ISOs shows that the NYISO had a disproportionate share of its electricity, 22%, generated by hydro. All the other RTO/ISOs only had very small percentages from Hydro except CAISO, which had 12.3%.

This large amount of hydro provided an anchor for prices that stabilized them. The new NY State mandates for wind and solar, etc., will show whether the NYISO can continue with only modest price increases.

An examination of ERCOT data did not establish any obvious reason why ERCOT was able to keep price increases at bay. It wasn’t wind and solar, because ERCOT only had the third highest amount of wind and solar in 2018, at 18.6%, while CAISO had 22.9% and SPP had 24%.

It’s fair to conclude, that RTO/ISOs, in general, have failed to achieve the lowest possible price for electricity, but that there may be situations where an RTO/ISO can succeed.

Because RTO/ISO auction markets are rigged, and are driving baseload power off the grid, it’s important to look deeper into the data.

In general, RTO/ISOs have failed to achieve the lowest prices possible for electricity, so the question remains, should we abandon RTO/ISOs for traditionally regulated markets?