There has suddenly been the realization it will be impossible to decarbonize the world without using hydrogen.

Steel cannot be produced without using hydrogen to replace coal, while limestone gives off CO2 when producing cement. Natural gas is actually methane that is a greenhouse gas, so it cannot be used to generate electricity or heat homes if full decarbonization is to be achieved.

Europe has published a manifesto for using hydrogen. See, A Hydrogen Fantasy

But, what are the facts about producing Hydrogen without using methane, CH4, for its production?

Electrolysis to extract hydrogen from water is the most likely process when fossil fuels are eliminated as the source.

This requires large quantities of electricity, but the real question is how many new power plants will have to be built to generate the required amount of electricity? 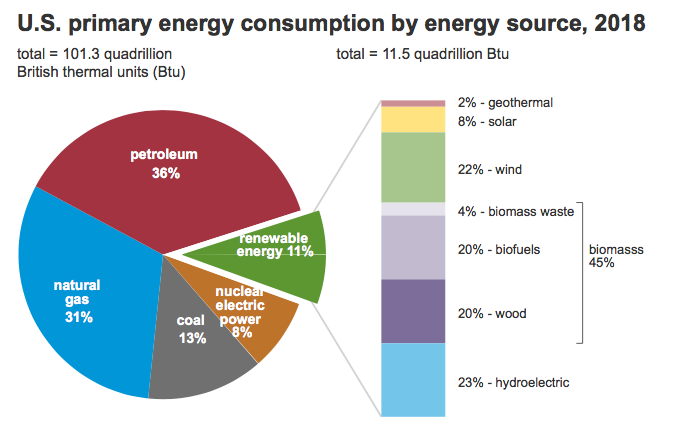 The accompanying table shows the pertinent data and conversions. It begins with determining how many of the 101.3 BTUs were derived from petroleum and natural gas.

I’ve ignored coal on the assumption that renewables can double in size. While a doubling of renewables is highly unlikely, it accommodates the current vision for wind and solar increasing from 3% of total BTUs, to 21% of the total by replacing coal with wind and solar.

The required total capacity required to generate enough electricity to produce the hydrogen required to decarbonize the United States is 2,270,759 Megawatts.

This is nearly twice the existing generating capacity serving the country now.

Presumably, some of the existing capacity can be used for producing hydrogen, but, at a minimum, over one-million MW of new generating capacity will have to be built.

Most likely, this new capacity will be from new gas turbine combined cycle power plants, designed to use hydrogen.

New nuclear plants could also be used, but, according to the Department of Energy (DOE), it would require around 1,800 new nuclear power plants to supply all the needed electricity for producing all the hydrogen that’s needed.

Without even considering the cost involved or the technical issues concerning the use of hydrogen, e.g., hydrogen embrittlement and damage to existing copper pipelines, it’s obvious that hydrogen is not a realistic solution for decarbonizing the world, let alone the United States.

One can also conclude that decarbonization isn’t realistic under any scenario.

While some people are hysterical, almost sobbing, over climate change, e.g., Greta Thunberg, the Paris Accord is an impossible fantasy that’s best forgotten.

Greta Thunberg is a tragic, pathetic child who has been brainwashed by the adults around her. No child should be subject to the fear induced by such manipulation.

2 Replies to “The Hydrogen Dream”