The previous article established how much new power generation capacity would be needed in the United States to replace fossil fuels with hydrogen. See, The Hydrogen Dream

A German information organization, Clean Energy Wire (CLEW), whose motto is, Journalism for the energy transition, published an update on the need for hydrogen in Germany.

“The production of ‘green hydrogen’ with renewable power using electrolysis has lately become a hot topic in German industry… Using renewable electricity to produce fossil fuel substitutes could solve some of the Energiewende’s toughest challenges.”

CLEW quoted Greenpeace Energy as saying the demand for electricity for producing hydrogen would be 1,089 TWh, which is twice Germany’s current consumption of 596 TWh.

Greenpeace Energy apparently expects renewables, wind and solar, to generate all the needed extra power, but, given the current resistance to wind by rank and file Germans, it would seem unlikely that the extra electricity will come from renewables. 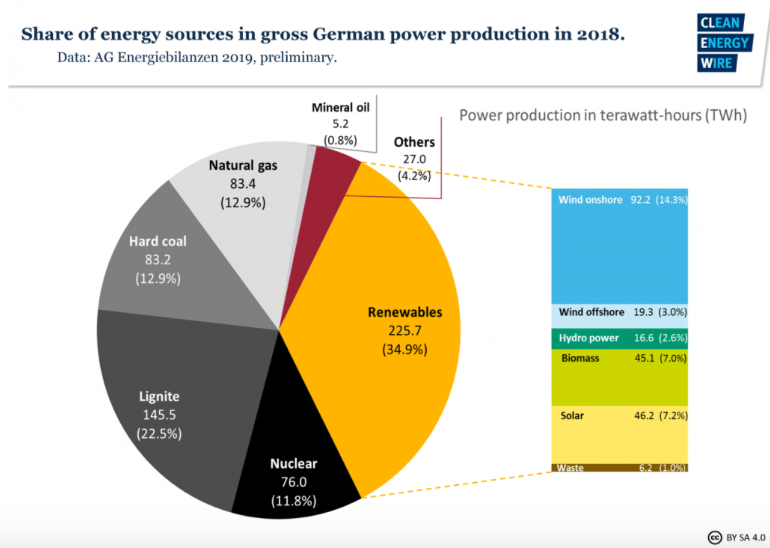 As this graph from CLEW shows, 70% of electricity comes from fossil fuels and nuclear, so additional renewables are needed to replace them, in addition to those needed to produce hydrogen.

(Not included in this chart is the use of fossil fuels for industry and transportation.)

It’s becoming clear it will be impossible to achieve decarbonization of the world without hydrogen, yet the ability to produce enough hydrogen can only be dreamed about.