The Duck Curve was born in California, when the California Independent System Operator (CAISO) needed to explain how the addition of renewables affected the grid.

A quick explanation of the anatomy of the Duck Curve:

Baseload power is typically supplied by natural gas combined cycle (NGCC) power plants, or nuclear, hydro, or coal, or a combination of them depending on which area of the country is being discussed.

Here is what the Duck is telling us.

It’s obvious the sun won’t shine when it rains or snows, but it’s also true wind can’t generate electricity when the wind is less than 6 mph, such as on hot summer windless afternoons.  And wind turbines must be shut down when the wind blows over 55 mph, or when the temperatures go below minus 20 degree F in the winter. 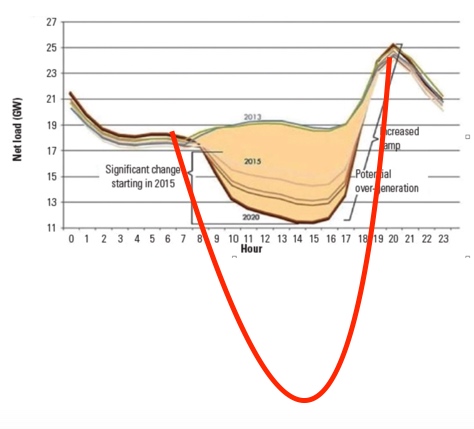 Storage would solve many of these problems, but even if it is technically possible to store all the electricity needed during 24 hours of the day, the amount of storage required to ensure the availability of electricity for several days when the sun doesn’t shine and wind can’t generate electricity, will cost trillions of dollars, about equal to our national debt.  Storage is discussed in detail in the book Energy: The Source of Prosperity and at, Four Minutes for $150 million

The Duck tells us a great deal about renewables, and is an excellent reference whenever renewables are discussed.

4 Replies to “The Incredible, Amazing Duck”