“More than 11,000 Scientists From Around the World Declare a Climate Emergency”

When going to the source of the article, which was the Alliance of World Scientists, to get the list of 11,000 scientists I got this message.

Perhaps the Washington Post should have checked the source before publishing the headline.

But, more importantly, “What do they believe?”

Here are a few key items from the “climate emergency” document signed by the 11,000 scientists. It establishes what they believe.

There are also an abundance of grand sounding objectives centered on social justice and equal rights, but note the focus on “transforming global society.”

Transforming global society is the true objective of the climate change movement.

The head of the UNFCCC said this, as did a member of the IPCC. For proof, see, Climate Change and Socialism

The “climate emergency” document attempts to establish key measurements to guide policies around the world. According to the document, here are a few of the trends that must be reversed:

These charts from the “climate emergency document” establishes a fixation on population, reminiscent of Ehrlich’s, The Population Bomb. 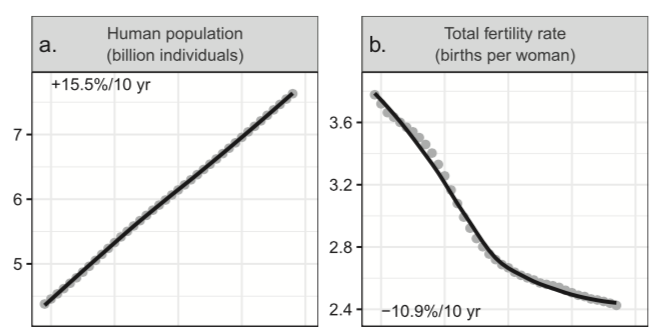 There are many other charts that are misleading at best. For example:

The chart on sea level rise is wrong and distorts the facts.

Another chart shows fossil fuel subsidies that include discounted prices for gasoline, such as in Saudi Arabia and Venezuela.

These discounted prices are to keep the cost of living low in these countries and has nothing to do with drilling or exploring for oil or natural gas.

They aren’t subsidies to support fossil fuels as inferred by the chart.

A third chart on tree cover loss completely ignores the greening of the world as a result of higher levels of atmospheric CO2.

Two questions not addressed in this “climate emergency” document are:

Forcing people to do something against their interest requires big government and force.

The list of 11,000 scientists has been found, but many are unqualified to comment on climate change or global warming.

While mechanical engineers and meteorologists have trained in many of the disciplines required for commenting on global warming, other disciplines such as Neuroscience,  Psychology, Veterinary, Animal Behaviorist, Hydroinformatics, Zoo keeper, Agronomist/beekeeping, and Snake Preservation, among them, probably don’t qualify.

Even if they can make credible comments on climate change/global warming, their judgment is in question for signing an anti-human anti-freedom manifesto.

It’s doubtful anyone at the Washington Post read the “world climate emergency” document that they proudly endorsed.

In reality, the “climate emergency” document is a manifesto against humanity and freedom.

You can verify this conclusion by reading the document found as a pdf at http://bit.ly/2NtVkTb