The EU has the temerity to compliment itself while using misleading graphics to show it has achieved large increases in the use of renewables.

But take a close look at the graphic from EUROSTAT, distributed by Clean Energy Wire (CLEW), and it’s clear that very little progress has been made in the use of renewables.

The graphic distorts the actual progress by including the use of renewables in 2004. The year 2004 should be the baseline from which improvements are measured.

Renewables in 2004 merely represented what already existed, generally hydropower. There had been very little wind and virtually no PV solar incorporated in the energy system in the EU in 2004. 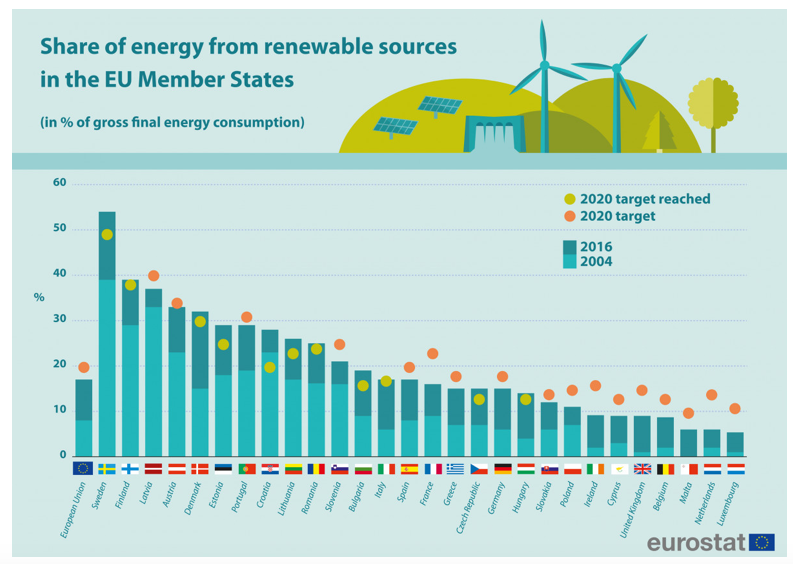 The graphic is intended to imply huge progress in the adoption of renewables, but actually demonstrates a pathetic minimal increase.

A truthful chart would only use the dark portions of the graph, which represents the added use of renewables since 2004.

An example is that of Finland, where hydro and nuclear have been the mainstay of Finland’s energy use, along with some forestry products, for many years and should not be included in a graphic purporting to show the adoption of renewables.

Sweden is an interesting example of how data is misused. A diagram from Sweden’s Energy Agency shows how energy is sourced and used in 2017. 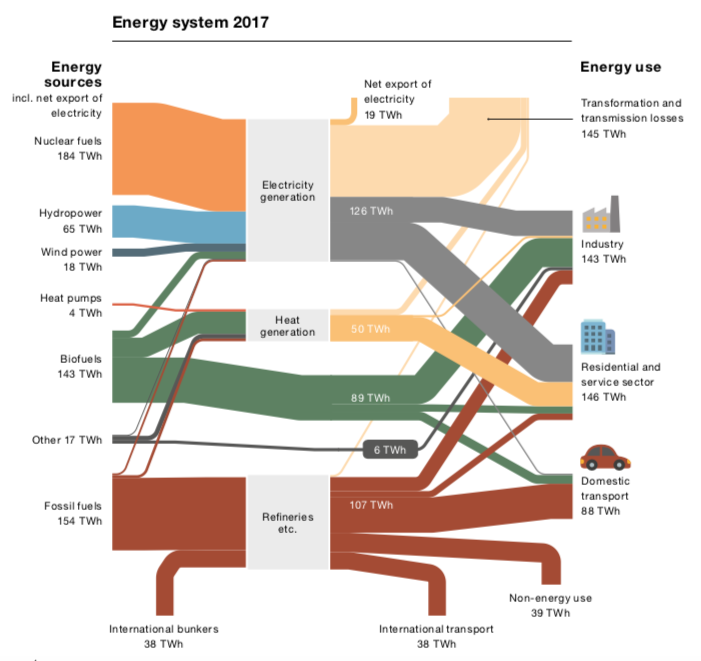 Note that nuclear and fossil fuels account for most energy usage, nearly two-thirds.

Biofuels, from forestry resources and products, make up the preponderance of renewables (62%), and always have. Note also that a large percentage of the forestry biofuels are used in the pulp and paper industry.

(Recycled wood and, apparently the wood used for paper-making, are considered biofuels, which would seem like a stretch as they are products, or components of a product, and not a fuel. The above diagram, however, shows biofuels used in industry as TWh, which would imply the generation of electricity, but the report from the Swedish Energy Agency doesn’t make that clear.)

Even with biofuels, Sweden has only increased its renewables by around 14 percentage points on the EUROSTAT graphic.

In the case of the EU, its use of renewables since 2014 was only 10% of all the energy the EU consumed: A paltry amount after spending billions of dollars on renewables.

The EUROSTAT graphic is an excellent example of how the proponents of catastrophic climate change distort the truth.

If renewables are important, it’s important to report how much they have increased … without incorporating past data.

Rather than sending Greta Thunberg to the United States to lecture Americans at the UN, perhaps she should spend more time lecturing her neighbors in Sweden, with its small increase in the use of renewables and its large use of fossil fuels.