Every year, the facts prove them wrong. Storms are not getting more severe or more frequent.

And the media is negligent by regurgitating the propaganda produced by AGW fanatics, like the Union of Concerned Scientists, Greenpeace, and the UNFCCC.

Here are the facts you won’t find in the media.

The decades before 1960 consistently had more major hurricanes hitting the United States than during the past 59 years. 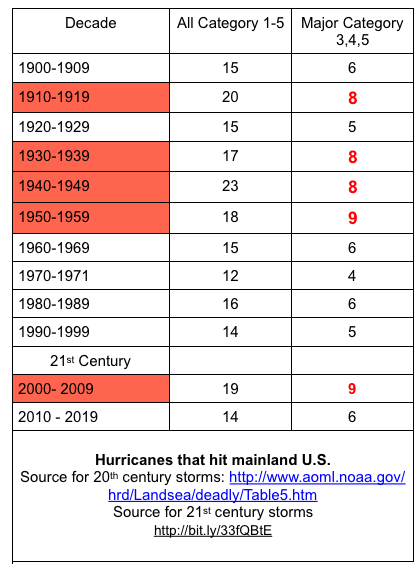 Here is Hurricane map from this season.

And the years 2010 through 2019 were supposed to be the warmest in history, where atmospheric CO2 levels are higher than at any time in the past 10,000 years.

This is important, since we can now see embryonic hurricanes as they emerge from North Africa — and then track them as they cross the Atlantic, with many swerving to the North and missing the United States by a wide margin.

We might never have known about these storms prior to the use of satellites, unless some hapless ship got in their way.

Hurricane Lisa in 2010, that rambled around the Cape Verde Islands off the coast of Africa, is an example of a storm that might not have been seen without satellites.

The area west of Mexico, the Gulf of Tehuantepec, has been known as the birthplace of Eastern Pacific hurricanes for at least the past two centuries.

Occasionally, they turn eastward, and hit  Mexico, with wind and rain sometimes extending into New Mexico and Texas.

It was one of these Tehuantepec hurricanes that we went through on our way to Japan while I was a cadet/midshipman.

The insurance industry is clamoring for action to stop global warming because they have suffered large losses in recent years.

However, it was the increase in coastal populations that caused the higher insurance losses. In his testimony to Congress, Professor Lomborg pointed out that, “The two coastal South Florida counties, Dade and Broward, are home to more people than the number of people who lived in 1930 in all 109 counties stretching from Texas through Virginia, along the Gulf and Atlantic coasts.”

And the story about tornadoes is similar. In 2019, the number of tornadoes has been slightly above average, and well below the worst year.

For more information about tornadoes, and for years prior to 2000, go to http://www.spc.noaa.gov/wcm/#data

As with hurricanes, satellites have resulted in more small tornadoes being seen than would have been seen otherwise.

Roger Pielke Jr. in his book The Rightful Place of Science: Disasters & Climate Change goes to great length to debunk the myth that climate change is causing more storms … or more natural disasters.

He quotes, Gilbert White, the great geographer and disasters expert, who wrote in 1945, “Floods are acts of God, but flood losses are largely acts of man.”

Later Pielke says, “There is no evidence to suggest that hurricanes have become more common, intense, or costly for any reason other than more people and their property are in locations vulnerable to their impacts.”

The idea that global warming is causing larger and more frequent storms is a phony myth.

It’s being perpetuated by alarmists in their efforts to scare people over CO2 emissions.

And the facts debunk it.

Storms are not getting more severe or more frequent.