Most attention is given to trade conflicts, especially between the US and China, with stock market swings attributed to the latest trade news.

The first two charts are from the Wall Street Journal, and they seem to indicate something besides trade is influencing economics. The EU curves both turned down at the end of 2017. While this was at the early stages of the trade differences, other events could also have been at work. 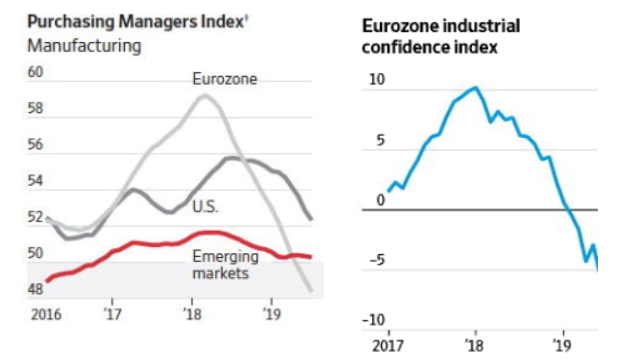 Graphs from WSJ August 3 and August 1 editions. It should be noted that the US PMI has fallen to around 48 since the chart was published.

The Euro Zone has been trending down since the beginning of 2018.

The next two charts show manufacturing growth in the US and in Germany.

(The scales are different so US growth is magnified when compared to Germany’s.)

German growth has been the laggard in the EU (1.4% in 2018) and Germany has taken the most extensive actions against CO2 emissions. Only Italy had lower GDP growth than Germany according to the World Bank.

An important difference between Europe and the United States has been the negative effects of Europe’s efforts to cut CO2 emissions.

“The cost burdens to reach the targets on carbon-dioxide emissions require far-reaching measures to increase efficiency in every area of our company. This will weigh on our earnings in 2020 and 2021.”

While the US has been eliminating regulations, Europe has been increasing them.

These are merely observations, but shouldn’t economists evaluate the economic consequences of Europe’s actions for cutting CO2 emissions?

And wouldn’t the results be the same here if we established new regulations to cut CO2?