…Why There is Good News Now…

In 2006, when Al Gore released his movie, An Inconvenient Truth, not too many people were aware that global warming might be a threat to mankind.

It’s understandable that many people found the movie’s storyline to be credible, and, though terribly flawed, the movie created an awareness and sense of urgency.

Over the 14 years following the release of Al Gore’s movie, enough new scientific evidence has become available for people, who may have originally been alarmed by the movie, to see that there is good news about how little CO2 affects temperatures.

Science has progressively shown that the climate is far less sensitive to CO2 than originally thought.

Actual temperature readings have shown that the IPCC computer projections have overstated the warming.

Dr. John Cristy, in his Congressional testimony, used the following chart to demonstrate that the IPCC computer projections were overstating temperature rise. 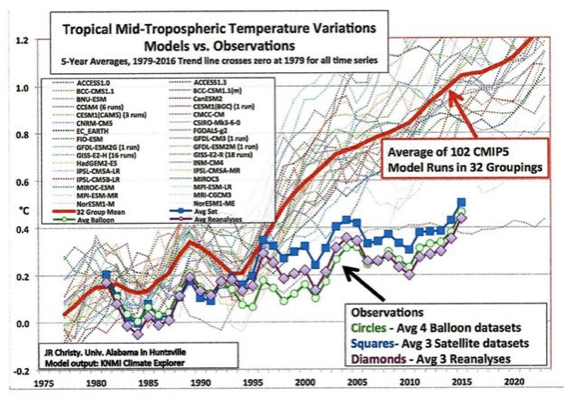 The average of 102 computer programs projected a temperature rise that was more than twice the actual temperature readings taken by satellites and balloons.

In other words, when GHG data is omitted from the program, the computer runs align with actual temperatures. Therefore, GHG data is distorting the outcomes. 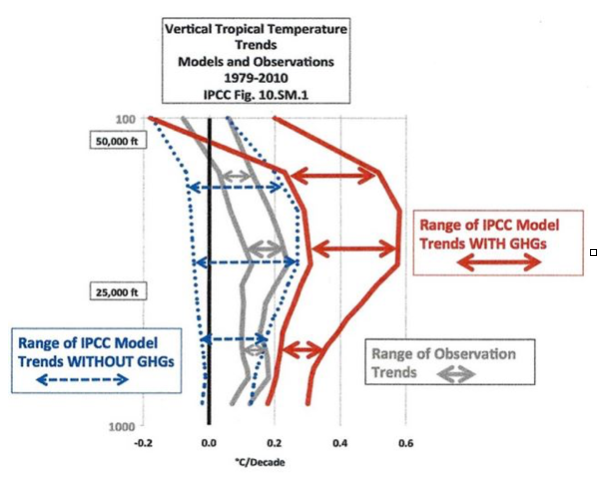 Dr. Judith Curry in 2017 said: “There is growing evidence that climate models are running too hot and that climate sensitivity to carbon dioxide is at the lower end of the range provided by the IPCC.”

While the original Charney report projected a 6℉ rise for a doubling of CO2, and the IPCC projected as much as 8.6℉ warming by 2100, the latest science shows that temperatures could rise as little as 1℉ and possibly 2.3℉, with a doubling of atmospheric CO2.

As can be seen from the following graph, the doubling of CO2 is barely noticeable. Also see, Good News for Humanity, Part 1. and Part 2.

The sawtooth curve shows the actual heat loss through the Earth’s atmosphere for each frequency, where the percentages of CO2 are 0 ppm, (in green), 400 ppm (in black) and 800 ppm (in red). The sawtooth curve is known as the Schwarzschild curve. (The heat loss for all other compounds are for conditions as they exist today.)

Of particular importance are the circled, red and black, CO2 curves.

These two curves, highlighted by the circle, are virtually the same, indicating that heat loss is nearly unchanged after doubling CO2 from 400 to 800 ppm.

While initial concerns, expressed by Al Gore and others, raised fears about global warming and climate change, science has now established that the temperature rise resulting from a doubling of CO2 in the atmosphere is minimal.

We have nothing to fear from using fossil fuels and releasing CO2 into the atmosphere.

And that’s good news for humanity.

4 Replies to “Why There is Good News Now”