In many respects, sales of battery-powered vehicles (BEVs) were a disappointment in 2019, while future prospects, especially in Europe, seem brighter. Stock prices shouldn’t be confused with progress.

US BEV sales increased by only one percent, an extremely disappointing increase given all the media hype. 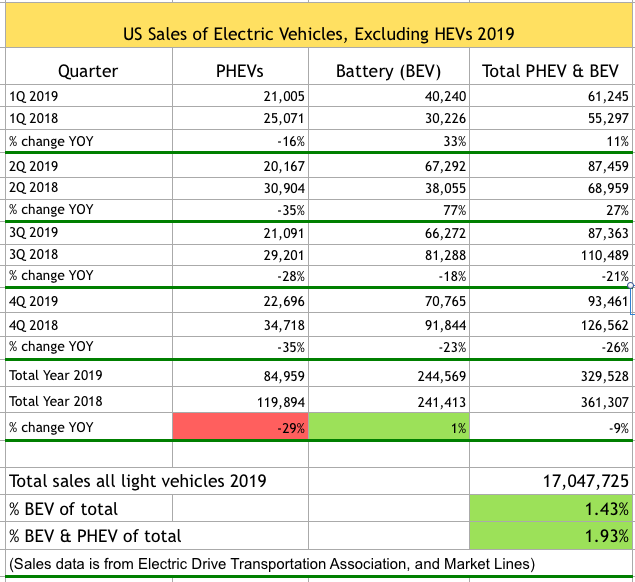 Tesla made big news with the opening of its factory in China, and with the sale of its vehicles in China and Germany.

However, the news that can potentially have the greatest effect on BEV sales worldwide is the decision by Europe, especially Germany, to virtually mandate the elimination of gasoline and diesel-powered vehicles, with future car production in Germany restricted to BEVs.

If Germany follows through with only building BEVs, it will force a rapid increase in the sale of BEVs worldwide.

How Germany will serve the United States market isn’t clear, since 25% of Germany’s car sales are in the US.

The EU’s move to eliminate gasoline and diesel powered vehicles is motivated by climate hysteria.

BEVs could make economic sense in the future, since it’s more efficient to convert natural gas to electricity with Natural Gas Combine Cycle power plants having an efficiency of 63%, than to burn gasoline in an internal combustion engine which has an efficiency of less than 30%. Fewer component parts in a BEV could eventually result in lower cost BEVs.

Whether climate hysteria will actually bring BEVs online sooner than would otherwise be the case will have to be seen.

Last year’s results were inconclusive in this regard.