…Oil Stocks are the New Tobacco?…

While this article in no way attempts to make stock market predictions, it can point out why Cramer is wrong. Cramer is too close to those who have bought into climate hysteria. The situation is similar to the story of the person living in New York City who said, on learning that Bush had been elected president: “But I don’t know a single person who voted for Bush.”

First, there are better analogies for what’s happening to oil stocks.

For example, a few companies are besieged by lawsuits over some supposedly catastrophic outcome from using their product.

There’s JNJ, with its talc products, and Bayer, the producer of RoundUp. Both have been targeted by lawyers and received court judgments against them amounting to millions of dollars.

Oil companies are in the same category as JNJ and Bayer, i.e., charged, but not yet proven guilty. See, Why There is Good News Now

Second, it can be shown that oil companies will exist well into the future no matter what the final verdict is about climate change. 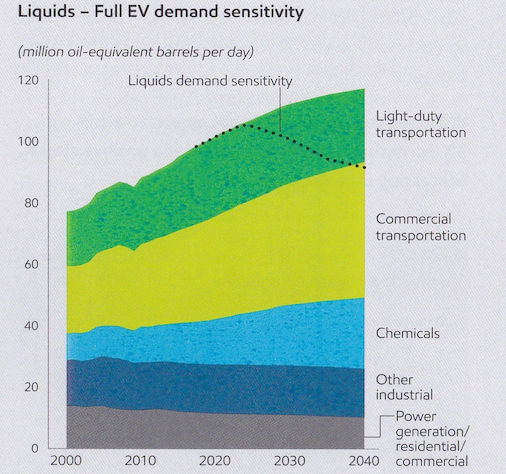 This graph, produced by EXXON, shows the effect of converting all light vehicles to battery-powered vehicles (BEVs). Additionally, even if half of commercial transportation is electrified there will still be a large market for oil.

Third, oil companies are also producers of natural gas, and natural gas will be around for many years into the future. Some people, especially in Germany, are promoting hydrogen to replace natural gas, but this is fraught with uncertainty. See, A Hydrogen Fantasy

Fourth, oil companies will not be prevented from drilling by banks and hedge funds refusing to loan them money. The Wall Street Journal published an article, Banks Don’t Hold the Key to Climate Change, which provided an excellent analysis as to why the call for keeping oil in the ground by hedge fund and other managers won’t affect the development and use of oil.

None of this is intended to claim that oil is a good or bad investment. Like all commodities, it will have its ups and downs.

Climate hysteria is captured in Cramer’s call for viewing oil as the new tobacco, but that was a bad analogy. Oil companies are not in a death knell phase.

Whether they are a good investment is up to individuals to decide after doing their research.

Oil companies are currently the whipping boy for politicians and those who have bought into climate hysteria.

2 Replies to “Oil Stocks are the New Tobacco?”