A look at what the GE annual report says about the wind turbine business.

Annual reports very often have important data in them that can be used for analysis.

The GE 2019 report is no different, though GE used to be very careful to omit data that competitors could use to determine important strategic information. Under the prior CEO, GE became careless.

Four interesting items of data for wind turbines in this annual report were:

From this information it’s possible, by adding some other key information, such as the tons of concrete used when installing a wind turbine, to determine the estimated cost per KW for a wind turbine.

Some analysts, when calculating levelized cost of electricity (LCOE), have been using $1,500 and even as low as $1,000 per KW. This means that their LCOEs are too low, and make wind turbines appear more competitive than they actually are.

Using a capacity factor (CF) of 32, probably close for this size unit, it’s also possible to determine how much electricity could be produced by these units.

We can then compare how many NGCC power plants it would take to replace all 3,424 wind turbines.

According to the EIA, the average size of natural gas combined cycle power plant was approximately 800 MW. 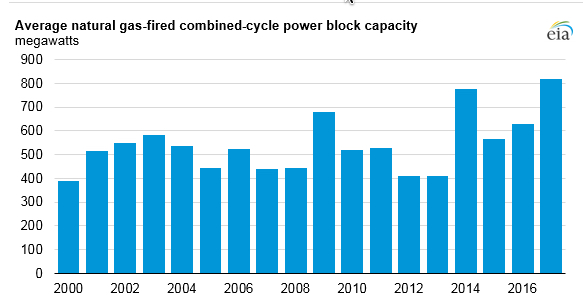 This would save over $15 billion of investment.

Wind turbines are a terrible waste of money. They are also unreliable, while NGCC power plants operate 24/7 year round.