…The Phony War Against Fossil Fuels…

Citigroup has projected that climate change would cost the world economy $44 trillion in gross domestic product by 2060.

This type of estimate is based on such things as rising sea levels and increased storms and wildfires.

Ceres, an activist group, claims that the US lost $1.8 trillion from 265 climate related extreme weather events since 1980, and $500 billion over the past five years.

They ignore all the proven facts that none of these events have actually increased in number or intensity.

Yet, by ignoring the facts these activists will claim that companies should be required to disclose all their climate risks.

The SEC, for example, would force all public companies to make such disclosures.

The purpose of this requirement is to cut off funds from the production of fossil fuels.

Banks would be forced to include climate risk in their capital ratio requirements.

If banks cut off money to drill or to mine or frack, it would cut the supply of fossil fuels. This is their intent.

It makes no difference what the facts are. These activists are intent on forcing their wishes onto everyone else.

Activists say they aren’t forcing anything onto people. They just want the financial institutions to do their job.

This is a blatant lie, because Ceres and other activist groups are making outrageous, untrue claims.

The average person in the United States will be victimized by these activist groups.

Even some business schools are involved in this charade.

Reportedly, Graham Steele, Director of the Corporations and Society Initiative at the Stanford Graduate School of Business, said, “It’s about disclosing to market participants and having public authorities grapple with what the risks are and adjusting their behavior accordingly.”

Why should any authority have to grapple with or adjust their behavior based on phony risks?

The head of the Federal Reserve recently said they may begin to consider the implications of climate change.

This could be dangerous, and and make investing in fossil fuels a risky proposition. 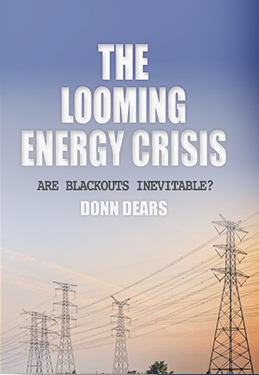 While the new book, The Looming Energy Crisis, doesn’t discuss financial institutions, it does expose how those controlling the electric grid are surreptitiously forcing wind and solar onto the grid while forcing fossil fuels and nuclear off the grid.

The book will be available soon.

2 Replies to “The Phony War Against Fossil Fuels”