(This is a repost of an article that was erased from the website by accident. A total of four articles will be republished over the next several weeks due to their being erased.)

Senator Merkley introduced a Bill, the Zero-Emission Vehicles Act of 2020, to end the sale of gas-powered vehicles by 2035, 15 years from now. It was co-sponsored in the House by Representative Mark Levin.

Senator Merkley cites climate change as the need for this legislation.

There are 253 million light vehicles, i.e., cars, on the road in the United States.

Is it possible to prohibit the sale of gasoline cars, i.e., internal combustion engine vehicle, (ICEs) in 2035?

Note that the legislation refers to Zero emission vehicles so, technically, it could include hydrogen powered FuelCell vehicles. If FuelCell vehicles become important, it will add additional complications, such as building out two different refueling networks, one for hydrogen and the other for electricity. Since hydrogen will probably be produced from electricity, it will also create different requirements for power generation, etc.

This article focuses solely on BEVs and assumes that FuelCell vehicles will not play a major role.

Let’s put the number of vehicles sold and on the road in perspective,

In normal years, around 17 million cars are sold annually.

If all the cars sold from 2021 to 2035 were BEVs, or around 17 million every year, they would barely replace all 253 million ICEs on the road today.

But that’s not what’s being proposed.

The proposal infers that the sale of BEVs must increase rapidly from now until 2035.

Let’s examine how quickly the sale of BEVs must increase under this legislation.

At that constant rate of increase, the number of BEVs sold in 2035 would be 17 million. This happens to equal the number of vehicles sold annually now.

If that rate can’t be maintained between now and 2035, there will be a bump in the road. The larger the shortfall in 2034, the bigger the bump.

Any ICE purchased after 2024 will be obsolete when sold.

This raises the question of whether it will be unlawful to sell a used ICE after 2035. The Bill is silent on that issue.

Note that The actual House Bill, H.R.2764, is more complicated than the article posted on Senator Merkley’s website, though the essence is the same. The differences are that a schedule is to be established for the required number of BEVs to be sold until 2040, with the sale of ICEs prohibited after 2040. There will also be a credit program, presumably similar to the existing credit program where manufacturers can buy credits if they miss their targets.

This is, of course, the objective of the legislation.

As in Cuba today, some people will nurse their ICEs to have them last longer, but will the government act to prohibit their continued use?

Since heavy trucks, etc., aren’t included in the legislation, the additional effect on the electric grid, etc., will be greater than visualized here if they also must be battery powered.

All of this is to occur within 15 years, which is an extraordinarily short period of time for a change like this to take place. For example, it has only been 13 years since Obama was elected president.

But can the 30% rate be maintained?

This table will allow you to track what actually happens. 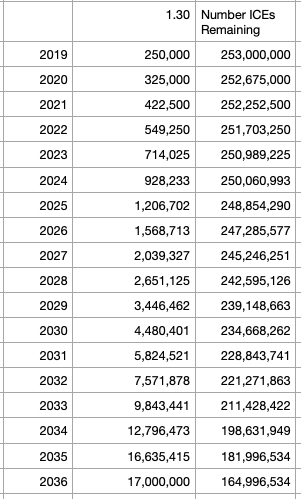 But this isn’t the only question.

The two most important unanswered questions are probably:

Note, adjacent to this article, is an announcement of a report being prepared that examines the effect of BEVs on the electric grid, including the required additional generation and the effect on the transmission and distribution system.