Part of the net-zero carbon agenda is to eliminate jet fuels made from fossil fuels.

Here is a chart of jet fuel consumption through 2010. The pandemic has made projections uncertain, but this chart provides a starting point for making assumptions about the use of biofuels. 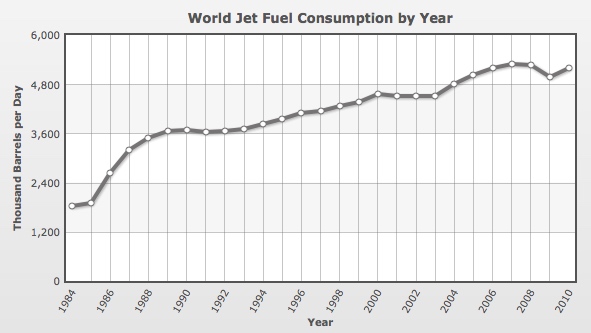 Aside from the increased cost, is it realistic to think that biofuels can replace jet fuel made from oil?

But air travel is forecast to double by 2030, certainly by 2050 when net-zero carbon is required by the UNFCCC.

Assuming, as also forecast, jet engine efficiency will improve 30% by then, we will need 116 billion gallons of jet fuel by 2030, or certainly by 2050.

Can biofuels supply 116 billion gallons of jet engine fuel by 2050?

This will depend on the availability of feedstocks.

Three companies were examined in 2015 and their data can provide an indicator of whether it’s possible to produce the required quantities of biofuels.

The leading company in producing biofuels from trees claimed it could produce 16 million gallons of bio jet fuel from 175,000 tons of wood pulp.

An analysis showed that it would require 9.1 million acres of 30-year-old pine trees every year to produce 116 billion gallons of bio jet fuel.

This requires nearly 275 million acres under cultivation with fast growing pine trees every year. For comparison, 91.7 million acres were planted with corn in the US in 2019.

While it’s possible that 275 million acres of fast growing pine trees can be planted around the world, it’s not highly likely.

A company said it could produce 10 million gallons of bio jet fuel annually from 200,000 tons of municipal solid waste.

The average American produces 2.3 pounds of solid waste daily, which generates 140 million tons of waste per year, which would produce 7 billion gallons of bio jet fuel per year.

It would require 17 times this much solid waste to produce the 116 billion gallons of bio jet fuel to meet demand.

It would appear as though this is an impossibility.

A company that had an algae farm on 300 acres in Arizona said it could produce one million gallons of biofuel per year.

It would require half the state of Arizona to be able to produce 116 billion gallons of biofuel, and, since the process needs continuous daytime sunlight, there are few other locations in the US where similar farms could be built.

Large quantities of water are also required for the process, though data isn’t available as to the exact amount as the company no longer has a website.

The company also said that the biofuel would still emit CO2, but that the emissions would be reduced by 70%.

Such a fuel wouldn’t meet the net-zero carbon requirement.

(Note: Exxon’s recent announcement of its producing 5 grams of oil per square meter of algae results in only 6 gallons of oil per acre, assuming the algae oil and petroleum oil have the same density. This is far below the quantity produced by the company cited above.)

The information about grease is limited to its use for making biodiesel, so it may not apply to bio jet fuel.

Data from Farm Energy Extension established that 22 pounds of cooking and trap grease were produced by every American and that 7.5 pounds of grease were required to produce 1 gallon of diesel fuel.

Therefore, all the grease in the United states would produce 1 billion gallons of diesel fuel. But 116 times this much would be needed to meet bio jet fuel demand if the grease could be used to make bio jet fuel.

While this information is not a precise, evaluation of how much grease would be needed to produce bio jet fuel, shows that it is highly unlikely that there is enough grease available, even if it could be collected, to produce anywhere near the quantities of bio jet fuel needed. Assuming it could be used for bio jet fuel.,

The proposal that jet fuel, produced from oil, can be replaced with biofuels, would appear to be unachievable.

While biofuels can work in a jet engine, it’s doubtful that there would be enough feedstock available to produce the required amount of biofuels to meet demand.

Biofuels to replace fossil fuels for air transport is just another fantasy, along with the others being used to support net-zero carbon policies.