My April 26 article showed that the best all-around vehicle was the ICE, and that a plug-in hybrid was a viable alternative, but that battery powered vehicles (BEVs) just didn’t add up.

It referenced another article showing that the cost of lithium-ion batteries would have to fall to $80 per kWh, from around $130 per kWH today, before BEVs would be competitive with ICE vehicles. (See below for link to article.)

The relative advantages or disadvantages of the three vehicle types are itemized here:

BEVs are being promoted by the government to eliminate the use of fossil fuels.

This is being done without considering national security implications from becoming dependent on China and other countries for the materials used in batteries.

It will also incur huge costs to increase generation, transmission and distribution capacity of the electric grid, with no assurance that so-called clean generation can successfully eliminate CO2 emissions from power plants.

BEVs now face another obstacle that could preclude their replacing ICE vehicles.

The increasing cost of materials will prevent BEVs from becoming price competitive with ICE vehicles.

As noted above, the cost of lithium-ion batteries must fall to $80 per kWh before BEVs are competitive with ICE vehicles. Now, it’s very likely that the cost of batteries will increase, not fall. 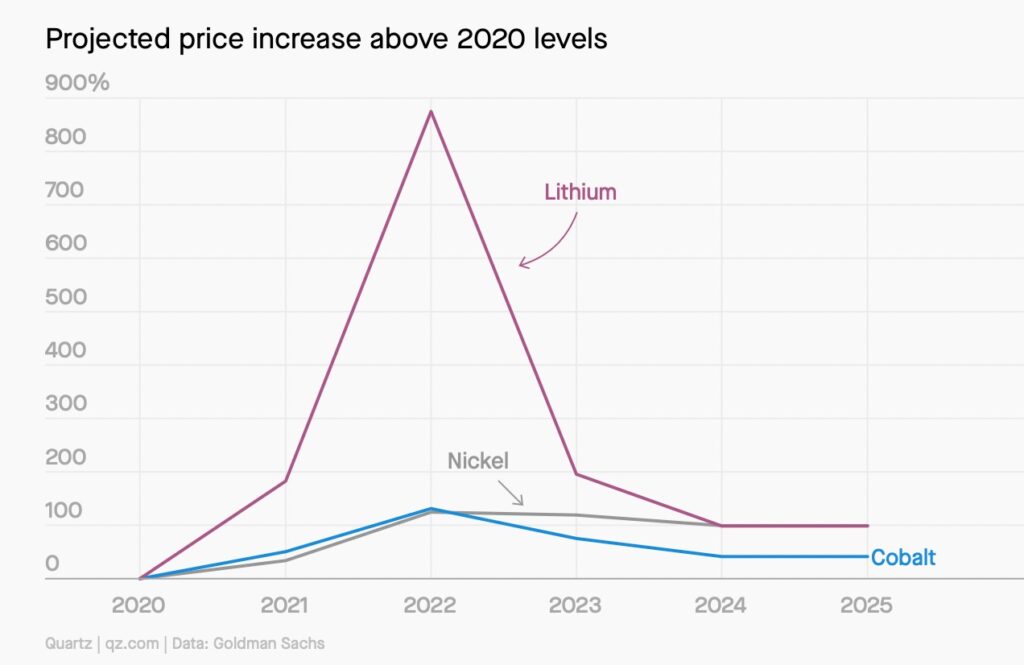 Goldman Sachs has predicted that, while prices of key material will rise substantially and spike in 2022 due to a lack of supply, they will mostly merely double in 2024 as new mines come into operation.

But, a doubling of material costs will mean that the cost of lithium-ion batteries will increase … not decrease.

According to Goldman Sachs, the increased cost of Lithium, Nickel and Cobalt will result in an 18% increase in the cost of lithium-ion batteries. This would increase the cost of batteries from $130, to over $150 per kWh hour.

Higher battery cost will impede adoption of BEVs and, depending on future material costs, could prevent BEVs from ever replacing ICE vehicles in a free market.

Goldman Sachs forecast a battery price of $123 per kWh in 2025 as the result of manufacturing cost improvements, but this is still higher than the price needed for BEVs to be cost competitive with ICE vehicles.

While gasoline prices are currently high, they are likely to fall with increased supplies of oil. Even if the price of gasoline was to remain higher than in the past, BEVs would still have to overcome negative concerns about range etc,

The major US automobile companies, i.e., GM, Ford and Chrysler, may be making a huge mistake by investing so much money in battery and BEV factories.

These are “bet your company” sized investments that will be unsustainable if BEVs become merely a niche market … which is entirely possible as the cost of BEVs increases.

Only Toyota has promoted plug-in hybrid vehicles over the past several years, even though the Japanese government established net-zero carbon goals. However, Japanese industrial strategy has always been uniform, which explains why Toyota recently announced support for BEV models.

Cost wise, plug-in hybrids would seem to be the best all-around choice for the family car.

The government’s hysterical response to climate change and its efforts to force the adoption of BEVs, combined with the car companies acquiescing to government dictates, could bode ill for America’s automobile industry.

There has been talk about stranded investment in the fossil fuel industry, but there is now the specter of stranded mis-investment by the automobile industry. Investments that will never be recovered.

ICE vehicles have been the preferred choice of the average American consumer. Only the rich and famous, and car aficionados have been enthusiastic about BEVs.

If BEV prices increase, which is now happening, ICE vehicles will continue to be bought by the average American in a free market.

Let others know about this article by using this link in an email https://bit.ly/3RDXOfB

10 Replies to “Can Battery-Powered Vehicles Compete?”