“The Biden-Harris Administration is committed to supporting our world-class scientists—like the team at NIF—whose work will help us solve humanity’s most complex and pressing problems, like providing clean power to combat climate change and maintaining a nuclear deterrent without nuclear testing.”

“Many advanced science and technology developments are still needed to achieve simple, affordable inertial fusion energy (IFE) to power homes and businesses, and DOE is currently restarting a broad-based, coordinated IFE program in the United States.”

“This monumental scientific breakthrough is a milestone for the future of clean energy”.

“This astonishing scientific advance puts us on the precipice of a future no longer reliant on fossil fuels but instead powered by new clean fusion energy,”

As can be seen, there was a concerted attempt to frame this breakthrough as important for clean power to fight climate change.

What are the facts?

From a scientific perspective, the real significance of the experiment was to confirm that it was possible to produce more energy than was used to spark the reaction … proof that fusion could work.

The experiment did not, however, demonstrate that fusion was about to create a new source of clean energy.

The attached diagram from the Financial Times provides a schematic of how the experiment worked. 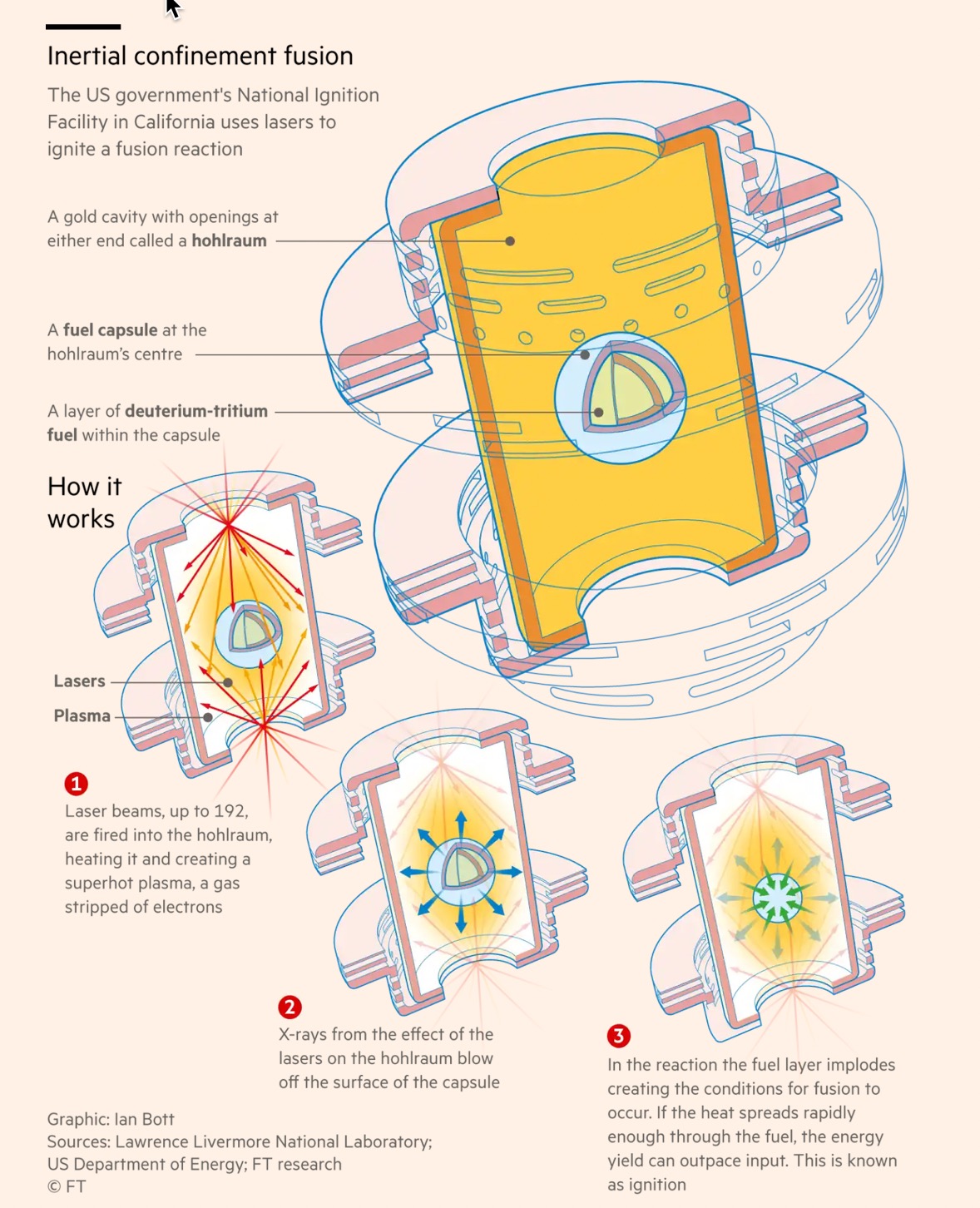 Another important result of the experiment was to confirm the United States was still a leader in weapons technology. It demonstrated confidence in DOE’s National Nuclear Security Administration’s (NNSA’s) Stockpile Stewardship Program.

In an op-ed in the Wall Street Journal, Professors Koonin and Powell, governors of Lawrence Livermore National Laboratory, said:

The U.S. nuclear deterrent is effective only if there’s confidence that the weapons remain effective. Laser ignition demonstrates to the world a deep understanding of weapons science and will be important in sustaining confidence in the coming decades.

In terms of clean energy, we are decades, perhaps 50 or more years, away from generating electricity on a commercial scale from this approach to fusion power, i.e., inertial fusion energy (IFE).

It may very well be that an alternative approach, i.e., magnetic confinement (using a doughnut-shaped reactor called a tokamak), could achieve the goal sooner.

ITER is a multinational effort, located in France, that is developing a fusion reactor based on the Tokamak design. It’s scheduled for its first demonstration of sustained plasma in 2025. The intent of ITER is to provide the scientific knowledge over a “multi-decade program” that could result in fusion being used to generate electricity.

In another scientific development, a team of MIT scientists, at Commonwealth Fusion Systems, achieved “an indisputable scientific advance by using a new type of superconducting material to build the most powerful magnet of its kind.”

“In a test last September [2021], the magnet achieved a field strength of 20 tesla. It’s nearly twice as strong as ITER’s comparable magnet, which relies on earlier superconducting materials.”

At some point, fusion will produce electricity that is, hopefully, less costly than using fossil fuels.

No one should believe, however, that fusion will replace fossil fuels within the foreseeable future.

Let others know about this article by using this link in an email bit.ly/3YSAoYw